skip to main | skip to sidebar

THE ALCHEMY OF ART 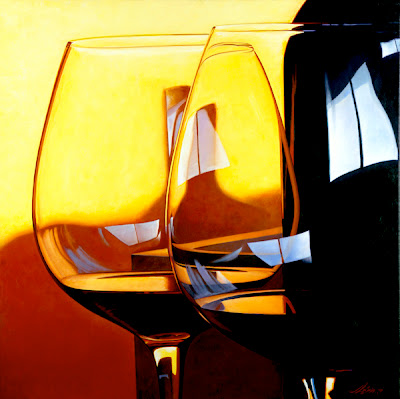 
I am still amazed that an artist or artisan can take raw materials such as canvas and pigments and then create something wonderful and desirable to others. Taken a step further, as is the case of the annual Central Coast Wine Classic, the benefits of this act ripple out to helping the less fortunate, and/or children deprived of an art education due to cutbacks in our schools. 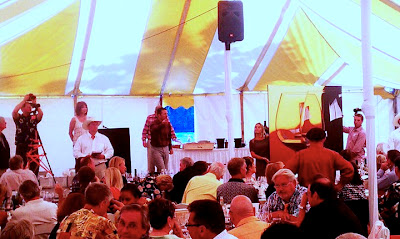 The weekend event, deserves it's reputation as the crème de la crème of the California fundraisers. This year's live auction offered lots of wine, travel,fine dining, etc. Also auctioned were  paintings many by well known artists such as Yuroz, Adam Licsko, James Paul Brown. While the big yellow and white tent held the joyful noise of wine makers, collectors, and merry enthusiasts, the finest wines flowed like water. My congratulations to Archie McLaren and the countless others who work so hard to throw the most intimate party for 500, and contribute so much to the well being of the community.


My painting "A Moment in time" was well received. It had gotten off to a rocky start in the studio (reference post below), but I am tempted to say I worked out the bugs. Please forgive the pun, but the bugs were painstakingly removed, and the linen canvas from Signature Canvas turned out to be a glorious surface to play on. 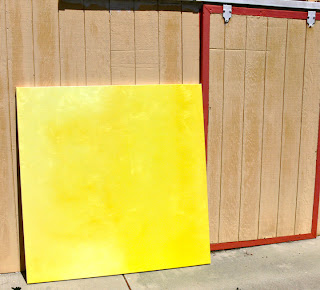 Unfinished canvas
60"x60"
it looks OK at this distance

Cadmium Yellow is one of my most treasured pigments. Yes, I am aware that there is a health hazard with them, but I am drawn to the cadmium colors. I sense some kind of extra energy in all of them.

My studio, once a guest bedroom, is fine for smaller works. Located in central California, the windows and doors are open most of the year for ventilation, however, I did not want to be in a confined space with twenty-five square feet of fresh out gassing paint (see links below). So, in the late afternoon, on the shady side of the barn, I leaned the big canvas against the wall. With a large brush, I laid on a generous amount of a Permalba white with a squeeze each of Cadmium Yellow Pale, Cadmium Yellow, and a splash of a French Lemon Yellow. The colors were blending beautifully into the clean, clear, soft yellow background I had seen in my mind. Just when I thought it couldn't get more perfect, I noticed that I was not alone. As fast as I was painting, every square inch (all 3,600) of it was filling with kamikaze-style little black bugs.

Anyone who has tried to rescue an innocent insect from fresh oil paint know how futile that is. I hoped I could just work them into the paint as each one is tiny. No one would notice. I tried to console myself saying this is life (in this case death), this is an authentic event in the evolution of a work of art. I kept working the canvas until it was completely covered and with paint and more bugs. As I walked away from the finished background, I faintly hoped in the morning the bugs would have somehow found away out of their predicament on their own.

No one would notice, hah!  At best, black mixed with yellow looks green. Most of them still appear very black. I spent a sizable part of the next day with a razor tipped art knife, with only moderate success at picking out bug parts. When it is completely dry, I will have to sand parts (with respirator), fill the knife gouges in the paint, dry, sand again, and repaint at least once the whole upper half of the painting. Next time, I will paint indoors, and then dry it outside in the full heat of the sun when there are far fewer bugs.

I had to laugh today, I remembered that yellow is used as a lure by agriculturists to trap insects.  It appears that many insects are attracted to yellow also, and my canvas may be the biggest sticky trap ever. My apologies to entomologists, environmentalists, and bugs.

Links to learn more about the toxicity of cadmium paints:
The University of Illinois
Golden Artist Colors
Yahoo Answers
Posted by Joanne Licsko at 11:36 AM 2 comments: 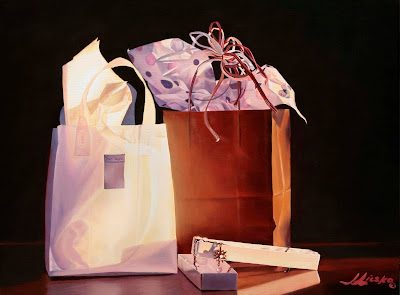 Have you ever wished that you could find someone to take over the business side of your art, and leave you to focus on just the creativity? I'd bet my first born the answer is yes. Well, forget about that dream, and face the fact that nobody cares more about your wallet, and your goals than you do. The successful artist takes care of his own business.      Most simply put… your job is to supply the art; the gallery's job is to put your work in front of collectors and the buying public, and get you the money. It can get a lot more complicated than that, so ask questions before you agree to leave your work with them.     Commissions vary. Non-profits may only take 30 or 40%. They are usually not aggressively sales oriented, so while you may get more, you may not sell much. There are a few galleries that want 70%. Before you start screaming, just know that some of that commission may be because of extremely high rents in the most valuable real estate areas in the country. For some artists, it may work out well. Most often, you will pay 50% commission, and for that you should get some services. Determine what's important to you. Ask questions. Will you be expected to pay for publicity, show opening expenses, invitations cost, etc? More often than not, it's all negotiable.     While your basic good gallery will pay you in thirty days, the annoying ones pay you within 30 days from the start of the next pay cycle.  Still, if they have other positive qualities, and the artist is disciplined, it can work.  Occasionally, a dealer, will buy the work from the artist.  Usually, those dealers will take an additional mark up percentage in their favor, and for some artists it works perhaps because of the volume of sales.     Some dealers will be so happy to tell you they sold one of your works, they will call you immediately. The best galleries put a check in the mail the same day, or within a few days of the sale.  These galleries know that most artists live close to the edge, and paying them quickly means they usually get the best work, and keeps their artists loyal.       Others, particularly if you are not in the same locality, might not ever tell you your work has sold, using your money until you discover the work is not in the gallery. At that time, they will tell you, they have just collected the money, and now they will be able to pay you.      Dealers to be most cautious of are those in financial trouble. They may sell your work, not pay you or the other artists, then declare bankruptcy. I have experienced this. The loss of your work  may be prevented by having a clause in your consignment agreement that states "the title of the work transfers to purchaser only when the artist has been paid in full".  To be sure you are fully protected, check with an art attorney.
For more valuable information on artist/dealer relations and so much more, visit Allan Bamberger's website Art Business .com.
Posted by Joanne Licsko at 2:33 PM 3 comments:

I reserve all rights including copyrights to my images and writing. Permission to use material within this blog will be given in writing only. Joanne Licsko 2009